get updates on my life

In current events and circumstances of the day, “the woman” seems to be under attack in the media with regards to “her body.” How are we regulating women’s bodies? It’s already enough regulation of women’s rights to feel pretty in their skin and beautiful with their sizes through the objectification and sexualization of women in the media. These regulations have been drawn up in meetings in attempts to overturn the premise of the landmark case, Roe v. Wade.  The holding in Roe v. Wade in 1973 held that the unduly restrictive state regulation of abortion is unconstitutional.

Let’s take this a step further, the unduly restrictive state regulation of brown people and minorities was also held unconstitutional through the passage of the 14th Amendment. Such is life. The regulation of a woman’s right to choose what she is willing to do with her body in terms of whether to bring life in this world is now being regulated. It’s amazing that I started writing this piece two years ago, but never had the gumption to complete the article in fear of being too controversial in my writing. However, I am a legal scholar and as we all know in the world of law it is open to one’s interpretation. The problem with the law being open to one’s own interpretation is that unfortunately, the deciders and creators of the law and policies have broad discretion coupled with their interpretation.

On August 31, 2021 in the wake of COVID19 Pandemic and Hurricane Ida, the Supreme Court of the United States refused to block a Texas law regarding abortion. The law expressly prohibits abortion after six weeks of pregnancy. According to the recent article in the New York Times, “this law amounts to nearly a complete ban on abortion in Texas because 85 to 90 percent of procedures in the state happen after the sixth week of pregnancy.”  In theory, if we think about it, most women don’t even know they are pregnant until after four weeks when a menstrual cycle is skipped. Taking this a step further, women like myself who suffer from PCOS (Polycystic Ovarian Syndrome) may or may not be able to even know when and if we are pregnant until much later because of the irregularity that we suffer with.

My favorite rapper, Tupac Shakur, who was way before his time stated in his song the following:

You know it makes me unhappy (what’s that)
When brothas make babies, and leave a young mother to be a pappy
And since we all came from a woman
Got our name from a woman and our game from a woman
I wonder why we take from our women
Why we rape our women, do we hate our women?
I think it’s time to kill for our women
Time to heal our women, be real to our women
And if we don’t we’ll have a race of babies
That will hate the ladies, that make the babies
And since a man can’t make one
He has no right to tell a woman when and where to create one
So will the real men get up
I know you’re fed up ladies, but keep your head up.

The significance of that quote reveres the woman. The woman births life to both men and women. The woman has always had the back of the man with little to no reciprocation and this has been evident since the beginning of time. Tupac said, “We will have a race of babies who hate the ladies that make the babies,” and when one thinks about that particular statement, maybe he was on to something. The woman has always been on the frontline and the catalyst for every good and positive thing in society. The woman is on the frontline even if she is in the background being of support to her family so that their lives can be enriched and of quality. My grandmother sacrificed some of her dreams and desires to take care of the home while my grandfather worked to provide, where is her praise?

What I do know is that no one’s body (the vessel that carries their soul) should be regulated. Male or Female, Man or Woman. Everyone should have freedom of choice. Society has battled recently the requirement of a mandate for vaccines and the common thing is that individuals should have the right to decide to be vaccinated or not? Assuming arguendo, how is this not the same principle when it comes to the regulations of bodies, in particular the female body? To me, it is the same principle.

I am pro-choice and pro-life. How can that be possible? Well, I am for individuals having the right to make sound choices and decisions on how they choose to live their lives even it means preserving their lives. Do we not have the right to make choices that are beneficial to our lives and well-being?

To be very humble, open, and transparent, for a year I have been seeing a fertility doctor because my greatest desire and prayer has been to become a mother in light of my diagnosis and health concerns. However, there are risks involved that I may have to endure and with that being said, I might have to make decisions that I don’t want to make when the time comes–that’s my reality. Should I be prohibited from making certain decisions due to the timeline beyond six weeks? Most women like me would probably never know until month two of conception and then there are risks. Speaking of risks, there are so many things that we endure as women with our bodies. Personally, I don’t think that my body that can carry another human should be regulated and stifled. It’s my body and no, I will not subscribe to “well you knew the consequences” because there are simply times where you don’t know the consequences and one has to act.  That’s the reality of most.

Remember it was the woman who birthed and started civilization and birthed what we now know as the world. If there is any species of the human race that will always be resilient, dependable, remarkable, and just downright amazing, it is the woman. Why? She breathes life into everything and everyone and she is a viable human life.

If you are not born a woman, you are born of a woman, so tell me could you handle being a woman? 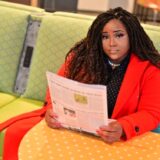